Seongsan ilchulbong (Sunrise peak) Jeju Island, South Korea is known well with ‘Sunrise Peak’. It is a tuff cone which is caused by hydro volcanic activity. Around 5,000 years ago, there is a hydro volcanic explosion under the sea. The volcanic cones was created by the piles of scoria cones that caused by Hawaiian eruptions or even Strombolian eruptions. The tuff cone has height about 180 meters and 600 meters for the crater in diameter. For the dip, it has over 45 degrees and 90 meters of the sea level. The cone exploded in wet and sticky condition which made water absorbed in volcanic ventilation so that it created a various depositional feature. The hydro volcanic is ongoing until the end of the explosion. That is why the crate seems like a bowl covered with scoria or lava. 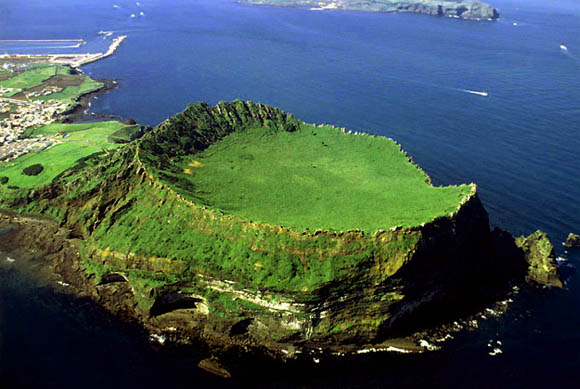 Unless for the west park sea, Seongsan Ilchulbong tuff cone formed in a steep cliff because of the wave that has been produced in the explosion. Through the explosion, Seongsan Ilchulbong Tuff Cone showed a perfect cross from the instracrater strata and now to be the marginal strata. About the various geological structure, it is assumed has a major role in big geological area because they do not only used to predict the past volcanic activities from Seongsan Ilchulbong Tuff Cone, but it also could show the process of Volcano explosion from the depositional process of hydro magmatic for the whole world. In fact, there are a wide range of hydro magnetic that is not different from Seongsan Ilchulbong. However, along the sea cliff you cannot find out other hydro magmatic activities in a well – preserved tuff cone or even any internal structures. Due to the remarkable scenery and also the scientific values, the site now designated as one of UNESCO World Natural Heritage. Well, it is worth for Seongsan Ilchulbong as the natural heritage for the humankind.

The natural ecosystem in Seongsan Ilchulbong is actually composed 222 taxa. It is being a home for 6 rare plant species such as Orchid, Neofinetia falcate, fern, Crypsinus hastatus, Orobanche coerulescents, two parasitic plants, Aeginetia Indica, two herbaceous plants, Orobanche coerulescents, Glehnia littoralis and also Arisaema heterophyllum. For Aeginetia Indica, it is the most important plant for plant distribution because it is only discovered in Jeju Island that is in the crater of Seongsan Ilchulbong Tuff Cone. Moreover, there are 300 additional species of marine algae there. The new species that has been found is Dasyiphonia Chejuensis.
Unknown
Share